Thanks for stopping by.

A few years back, I was engaged by a family to work privately with their son. He had several cognitive and emotional processing challenges, and we used songwriting as a way to explore various topics or themes he was learning in school or home. This work lasted for over eight years, then I had a child and moved, so I stopped working with him. I can proudly say that the young boy I started working with is now a young man, with a degree, and maybe some of our songwriting sessions contributed to his path. I know he and his family have contributed to my path in numerous ways.

As a songwriter, performing musician, HCPC registered Music Therapist, and Neurological Music Therapist, I find music a mysterious and powerful, yet totally accessible and familiar form. Its influence on the human body and mind continues to intrigue and amaze me!

If you would like information about the Music Therapy services I offer, or would like to receive updates about my performances, please email me! 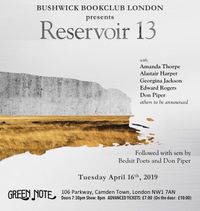 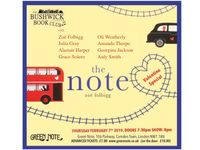 Bushwick Bookclub London returns to the Green Note to present an array of songs, poems, prose and polvorones in response to Zoe Folbigg's 'The Note'....

A Christmas Memory by Truman Capote 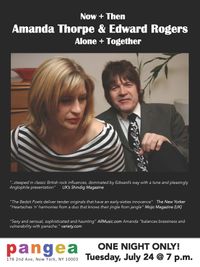 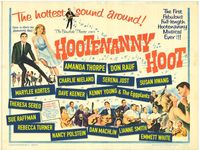 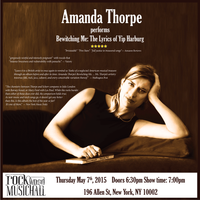 Returning for a fleeting vist to NYC, I will be performing Bewitching Me: the lyrics of Yip Harburg - our take on some of the great american classics. 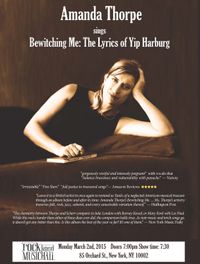 This event is 21 and over

Bewitching Me: The Lyrics of Yip Harburg

Two of E.Y. “Yip” Harburg's most famous lyrics form brackets around the 1930s: “Brother, Can You Spare a Dime?” written for the musical Americana, told from the point of view of a WWI vet (you can call him “Al”) who’s standing in a breadline, wondering where his slice of the American dream is, and “Over The Rainbow,” sung by a girl clutching her dog, gazing into the heavens, wishing she could get the hell out of Kansas. Contrary to her understanding, birds can’t fly “over” the rainbow, or even “beyond” the rainbow, since a rainbow isn’t a physical thing, but simply the sun shining through rain or mist. But Harburg was fond of the rainbow (“Look to the Rainbow,” “I've Got a Rainbow Working For Me,” “Where Has the Rainbow Gone?”) as he was of the moon (“Old Devil Moon,” “It's Only a Paper Moon,” “Moon About Town,” “Moonlight and Pretzels,” seriously), Paris (“April in Paris,” “Paris Is a Lonely Town,” “Battle of Paris”) and intricately worded ways to describe romantic conditions.

He gave us “When I can't fondle the hand I'm fond of, I fondle the hand at hand,” which deserves a hallowed place in the realm of self-justification. And “Oh, if I could only say what I mean, I mean if I could mean what I say, that is, I mean to say that I mean to say that…” and “You and your glance make this romance too hot to handle,” so you wonder why he's not often spoken of in the same category as Lorenz Hart, Cole Porter, Johnny Mercer. Sure, most people on the planet know “Over The Rainbow” and the other Ozian songs (“Ding-Dong! The Witch Is Dead,” the most gleeful celebration of edificial homicide there is, and “If I Only Had a Brain,” and “We're Off to See the Wizar d”). “Brother” remains the most vivid and unsparing musical legacy of the Depression (and takes on new currency in this era of unprecedented income disparity). And “April In Paris,” “It's Only a Paper Moon,” and “Down With Love” are acknowledged standards. (In the latter song, Harburg takes that rainbow and that moon and suggests what you can do with them: “Down with love, let’s liquidate all its friends/Moon and June and roses and rainbow’s ends." "Liquidate!" Find that in another lyric.) Still, compared with some of his contemporaries, he's relatively under-appreciated.

Harburg wrote for Munchkins and leprechauns and animated French cats. He wrote the only song with “Glocca Morra” in its title. His “I Love To Singa” was memorably performed by both Al and Owl Jolson. His “Last Night When We Were Young” is among the most aching love songs ever, sad as hell, yet he could also be deceptively casual about such matters as unrequited love: “Buds won't bud, notes won't note, and knots won't knot/T's won't cross and I's won't dot when the hope you hope goes to pot.” If you’re counting, that’s 24 consecutive one-syllable words that encapsulate the nothing-you-can do-about-it distress of crushing on someone who’s disinclined to reciprocate.

When Amanda Thorpe—singer-songwriter, born in Derby, England, relocated to New York City, currently on temporary assignment in Paris—expressed her intention to record an album of songs with Harburg lyrics, it seemed like a notion from out of the blue, a whim, because of all the lyricists one might imagine her delving into, this one seemed out of her usual zone. But the idea had been brewing for quite a while, more than a decade, in fact.

“I met the Harburgs in 2002,” Amanda says, “when I co-led some musical theater summer school projects organized by Deena Harburg, Yip's daughter-in-law, and I also worked closely with her son, Ben, using song lyrics as an educational tool. Ernie Harburg, Yip’s son, and Deena both shared their knowledge and experience, and gave me books to read about songwriters, the psychology of music, and its power in healing and teaching. One day, at one of Ernie's favorite pastry shops on Avenue A, he said, ‘You should record some of Yip's songs!’ and I thought it was a great idea. It took me a long time to bring it to reality, but it’s been on my mind consistently for all these years.”

Once Amanda decided to plunge in, she was given full access to the vast Harburg catalog, songs written with a long list of collaborators (Harold Arlen, Burton Lane, Vernon Duke, Arthur Schwartz). “It was a treasure trove. I tried to find themes to narrow down the selection—moon songs, love songs, troubled-love songs, political or rainbow songs—but ultimately I abandoned that and simply homed in on songs that resonated with me, that I found myself singing whilst taking a walk or doing something totally non–music related. The hardest part was considering how I would reinterpret these songs and bring something new to a catalog that’s been so impeccably performed. If you have Billie Holiday singing ‘I’m Yours,’ or Peggy Lee doing ‘Last Night When We Were Young’ how are you going to top that? And there are so many versions of ‘Over the Rainbow’ and ‘Brother, Can You Spare a Dime?’” what can you do that is new and fresh? Ernie and Deena encouraged me to feel liberated to interpret as I wanted and to take chances.”

Last summer, Amanda and her musical accomplices, including producer Don Piper, went into the studio to record what has become Bewitching Me: The Lyrics of Yip Harburg. It’s a haunting and daring album, completely modern in texture, but with echoes of other musical periods. At times, what she and guitarist Tony Scherr are up to—on tracks like “Last Night When We Were Young”—goes back to the vintage lounge sound of Julie London with Barney Kessell, or Mary Ford with Les Paul. “I’m Yours,” to me, has the otherworldly sexiness of a lost doo-wop single from the late ’50s (a follow-up, perhaps, to Rosie and The Originals’ “Angel Baby”) and on the lesser-known “Paris Is a Lonely Town,” Amanda is like Greta Gerwig in Frances Ha, wandering aimlessly around Paris, filmed in nouvelle vague black and white: melancholy and charming. It's a later Harburg-Arlen song, from 1962, and it’s the flip side, emotionally, of Yip’s “April in Paris,” where the singer is “drunk with all the happiness that spring can give.” Here, “The band playing Bizet along the Champs-Elysees sounds like way-down blues,” and how dazzling is that line?

On “I Like the Likes of You,” Amanda navigates the giddy stumble of hesitancy in its verse (“You see the state I’m in, I mean I’m in a mess, what was that speech, oh yes, yes”), and she's playful and jazzy on “Then I'll Be Tired of You,” and she nails the pop-pop-pop rhymes in Finian's Rainbow's “Old Devil Moon” (the whole tricky glance-romance-handle-candle-night-light situation in the bridge). What she's done, bewitchingly, is take the liberties the Harburgs granted her—a bit of mod Bossa Nova on “When I'm Not Near the Man I Love,” a slow, yearning “Over the Rainbow”—and created a volume of musical short stories. “What is the journey for?” she and Harburg ask in “Adrift on a Star,” another lovely, later (1961) lyric. As in “Over the Rainbow,” answers are out of reach. But there are no bluebirds or troubles melting like lemon drops. “Adrift on a Star” is filled with metaphysical puzzles: “Can it be the heart is the sea, and love is the golden shore?”

It took a while for Amanda to get around to recording these songs. But it all turned out beautifully, as love songs sometimes do.